Arthur Bruzzone | BEHIND THE WALL

The GOP must fast-track vote by mail and ballot harvesting

SAN FRANCISCO, CA.    It’s time for the Republican National Committee (RNC) to reverse position and stress vote-by-mail and ballot harvesting in all states where it is permitted.

If the RNC needs convincing evidence to change policy, it should look no farther than California.  The state’s GOP flipped four congressional seats taken by the Democrats in 2018.  The California Republican Party (CRP) outmaneuvered the Democrats by appropriating the Democratic Party’s vote-by-mail and ballot collection operations.

They synchronized a massive voter contact program with an absentee ballot collection operation. Their ballot-harvesting strategy included placing drop boxes in local churches, shopping centers, and other friendly locations. One person was assigned to each box to collect votes and hand them over to voting officials.

Yet, at the same time, the Republican National Committee (RNC) was vigorously opposing third-party ballot collection and called ballot harvesting on its website, ProtectTheVote.org, "unacceptable".
.
But, quietly the RNC was collaborating with the California Republican Party in the use of the Democrats’ ballot harvesting tactics, including third party pickups and ballot drop boxes.

As a small business owner, I urge you to end the quarantine. We have time if you act now and prioritize the country’s economic pandemic. At the start, you heeded your public health experts and approved their recommended multi-week quarantine. Bring the economy back reopen America’s small businesses, and put our workers back to work.

It’s clear the U.S. economy is falling into a recession and it may experience an historical depression with a recovery that could take years.

The numbers are astonishing. In just two weeks, California has recorded 2.7 million unemployment claims. National jobless claims have reached17 million. Economists say that as many as 47 million Americans could lose their jobs as a result of the viral pandemic.

Keep in mind that The Federal Reserve reported last year that four out of ten Americans don’t have enough cash on hand to cover a $400 emergency.

PBS’s “Frontline” recently aired a two-part series titled “Facebook’s Dilemma”. The series highlighted Facebook’s privacy holes and how it was used as a tool for genocide in Myanmar.

Unfortunately, the program also pushed the narrative that Facebook was used to affect the outcome of the 2016 presidential campaign, and possibly the 2018 midterm elections.

The program included interviews of James Clapper, former Director of National Intelligence, who claimed that the Russians used Facebook to elect Donald Trump, and comments by Rand Waltzman, researcher for the Defense Department, who said that social media can manipulate users to vote in a prescribed way.

It’s troubling that very smart people like Waltzman and Clapper can confidently make such statements, but have never run a political campaign.

From my experience as a campaigner and chair of major political party in San Francisco, I offer ten reasons why Facebook fails to deliver votes.

Echo chambers — a media phenomena in which information, ideas, or allegations are amplified and reinforced by repetition — have been with us as long as there’s been party politics.

Before radio, television and the Internet, when printed newspapers issued news, the editors and news syndicates had monopoly power to embrace allies and destroy opponents. As Aled Jones noted in Powers of the Press, newspapers then “had been securely implanted into the cultural landscape as an essential reference point in the daily lives of millions of people”.

That changed with social media and journalism’s democratization.

Sixty-five percent of Hispanics, 70 percent of independents, 73 percent of Democrats agreed that “local authorities should not be able to ignore a federal request to hold a detained person who is in the country illegally".

When it comes to dangerous and violent unauthorized-immigrant felons, California voters, not lawmakers, should decide sanctuary policy. This is first and foremost a crime issue and secondarily an immigration issue.

Sacramento lawmakers, provoked by the Trump administration’s defunding threats, are considering new legislation, SB54. The bill’s requirements make San Francisco’s sanctuary city ordinance look moderate in comparison. The California Values Act would effectively prohibit all California cities, schools, including charter schools, and public hospitals, from cooperating with federal immigration authorities — including with regard to violent felons in the country illegally. The bill prohibits “detaining an individual on the basis of a hold request” issued by Immigration and Customs Enforcement or Customs and Border Protection as well as any other federal immigration authorities.

Technology has Disrupted the Leak Tradition 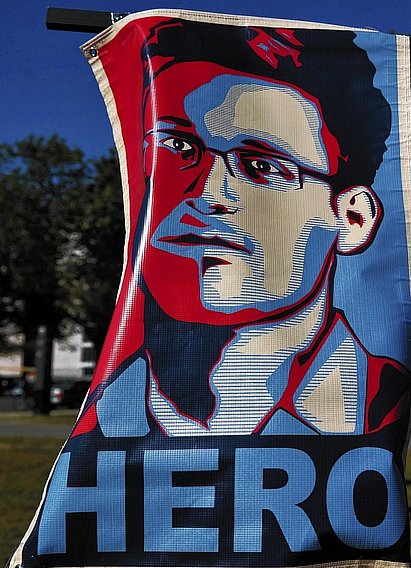 Early in episode four of Showtime’s “Homeland”, an angry President-elect Elizabeth Keane (Elizabeth Marvel) faces CIA Director Dar Adal (F. Murray Abraham) and says, “if you think it’s wise to tie the President’s hands so publicly, what’s not wise is peddling unverified and politically motivated horseshit to the press. And if you can’t find me the ‘career officers’ responsible, I’ll get someone who can”.

Pure synchronicity. Since, at the time of the airing, President Trump was facing a similar situation that would lead to the termination of his National Security advisor, Michael T. Flynn.

Not since the assassination of President John F. Kennedy has the mainstream media been so focused on the deep state

“’’Deep state’ has historically been associated with countries like Turkey, where sophisticated shadow governments allegedly control or influence key aspects of state policy,” notes Amanda Taub in the New York Times. Winston Churchill referred to the state within the state as the “High Cabal”.

Technology has disrupted the leak tradition. Completely transformed it, in fact, with a mobile app called Confide.

Trump will Pivot to the Left to Insure his Re-election

His 2.8 million vote loss in the popular vote overshadowed his razor thin electoral win. He beat his opponent in Michigan by 10,704 votes, Wisconsin, by 22,748 votes, and Pennsylvania by 44,292 votes. With those 77.744 votes, he secured victory.

He knows his margin of error in 2020 could also be precariously thin.

On election night 2016, Donald Trump was prepared for defeat. The pollsters and media had lowered his expectations. But to lose re-election, that would be a humiliation. Almost as humbling as the multi-billion dollar losses from his three Atlantic City casino projects.

Doublethink. The ability to hold two contradictory opinions at the same time without noticing the contradiction. If the second proposition is true — that the alleged Russian hack impacted Clinton’s election results — then the final polls and vote count would show erosion.

So how did the alleged Russian email hack affect Clinton’s poll numbers before Election Day?

By the final days of the 2016 presidential campaign, every form of media was under attack. No one escaped. Mainstream media, remote news outposts, noted commentators, and popular sensational blogs were all involved in the wreck. Donald Trump may have instigated it but he couldn’t have imagined that he would jolt the entire media world.

In a previous article, I spotlighted Donald Trump’s use of armed propaganda — — namely, the tactic, used by armed insurgents, to incite an opponent’s overreaction. And in the process, unmask the enemy’s deviousness, injustice, and some cases, brutality. Trump relentlessly attacked mainstream media, and they counter punched. That was Trump’s precise intention: to demonstrate that mainstream media is not impartial.

Pain Relief, If Your Candidate Loses

Over this weekend, before Election Day, I have received several calls and emails from friends and colleagues.

Some support Trump, others support Clinton. Each used the word "fear" or "worried" in their message.

I tried to calm them by reminding them that those who wrote the U.S. Constitution baked in a healthy dose of counterbalance to alleviate their fear of despots.

Then, it was King George III of England -- a stubborn, self-absorbed monarch who didn't simply reject America's demand for independence; he wanted to punish the colonies with a prolonged war to break the will of the new country.

The drafters of the Constitution didn't just have King George III in mind.  They also addressed the flaws and dangers of all men and women who assume power.

"Ambition must be made to counteract ambition," wrote Benjamin Franklin.

In their wisdom, they anticipated a President Hillary Clinton and President Donald Trump.

See More
Arthur Bruzzone, MA, MBA, is a San Francisco independent commentator, columnist, producer and TV host. His articles have been featured online and in traditional print media including the Wall Street Journal. His comments have been covered by national and international news services, including CNN, FOX-News, the BBC, and Asian Press. He is a former California State commissioner for an environmental agency BCDC (Bay Conservation and Development Commission), and former chair of the San Francisco GOP. Bruzzone has produced and hosted three award-winning television public affairs program. He has earned two national ACE nominations, two Western U.S. ACE awards, and numerous regional awards.