Arthur Bruzzone | BEHIND THE WALL

See More
Arthur Bruzzone, MA, MBA, is a San Francisco independent commentator, columnist, producer and TV host. His articles have been featured online and in traditional print media including the Wall Street Journal. His comments have been covered by national and international news services, including CNN, FOX-News, the BBC, and Asian Press. He is a former California State commissioner for an environmental agency BCDC (Bay Conservation and Development Commission), and former chair of the San Francisco GOP. Bruzzone has produced and hosted three award-winning television public affairs program. He has earned two national ACE nominations, two Western U.S. ACE awards, and numerous regional awards.

As of late, I've remained an observer.

A time back, addressing a stubbornly loyal Republican women's group in San Francisco, I severely criticized the GOP.  That was in 2008.  That led to my article, "From 2D to 3D 'Fusion' Politics.

Since then, I've been gratified to see other observers and commentators bracket the two parties as one in the same --- Pepsi vs Coke, Verizon vs. ATT, the list goes on.  Minor differences, but essentially the same.

Until this year.  Bernie the Bomb Thrower.  Trump, the Bombastic fusion candidate.  I find them refreshing, as you might expect.

After hundreds of articles, speeches and TV interviews, I'm getting the urge again.  And have no idea what will come.  And that's intriguing....I hope you'll follow me.

SAN FRANCISCO, CA --  The Occupy Wall Street message has been effective. They initially chose the right common enemy.  The banks and bank bailouts angered not just the student demonstrators.  The banks and financial giants generated anger among home owners, those who owe more than their homes are worth, millions who have lost their homes, or watched bank bailouts, or saw their jobs eliminated or threatened by the subsequent recession.  Targeting the banks and government bailouts was an effective common theme.

But for a second time, Occupy demonstrators have targeted West Coast ports.  A total media misfire.  Ports are not banks.

While walking to a meeting in San Francisco's Financial District, I passed near a big demonstration in front of Wells Fargo Bank's California Street Headquarters. I knew something was up when I saw police were congregating three blocks away.

SAN FRANCISCO, CA --  We’re all familiar with the monthly unemployment rate referred to as U-3.

Obama outsmarts the republicans, for now

SAN FRANCISCO, CA --- The overriding goal of every first term president is be a two-term president.  or this President, much more is at stake than personal achievement.

As a former Harvard University constitutional law professor, he knows that a second term offers him the opportunity to change the Supreme Court for decades.  That would provide him a second major victory.  To stem off legal attempts to repeal his health care initiative—the measure which would mark his place in U.S. history.   But he has a third priority of winning re-election:  To use the fiscal crisis – which will only exacerbate in the next 24 months – to accomplish his pervasive goal, distributive justice.

Why California continues to buck national trends and choose Democrats

Around the nation voters overwhelmingly chose Republicans for the House, the U.S. Senate, and many statehouses. Meanwhile California voters chose Democrats for every statewide race.

Why this political countertrend?

SAN FRANCISCO, CA -- Senate Republicans got ensnarled by the Democrats over the extended unemployment benefits bill.

So did I. In both cases, it was a failure of communication, not principle.

But throughout this year, as President Ob 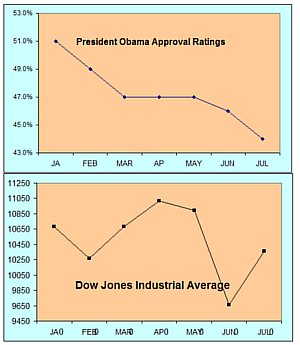 ama’s polls numbers have dropped, the stock market has been rising.

Could the recent spike in the Dow Jones Industrial average (“the Dow”) off its June bottom portend the November elections.

I averaged two Obama-friendly polls – the NBC and Gallup polls --- and graphed them based on monthly numbers. The Dow Jones Industrial monthly average samplings are pictured on the second graph.

Again, there’s no direct correlation. But as Obama’s numbers started dropping the Dow began rising. Note that both starting tanking as the health care battle reached its climax in this summer.

“Heaven has no rage like love to hatred turned,

Nor hell a fury like a woman scorned.” --William Congreve

For a majority of American voters– those who voted for Barack Obama-- burns a hell fury. Namely, betrayal. One prominent American has unleashed that fury in a scathing commentary. Mort Zuckerman, the wealthy businessman and commentator for US News & World Report, in “Obama Is Barely Treading Water,” shows no mercy in his indictment for Obama -- for whom he voted and admits wrote a speech.

From Newsmax:  Larry J. Sabato’s Crystal Ball has published its latest analysis of the races in the U.S. Senate, detailing state-by-state the likely outcome of the 2010 midterm elections. It shows that if all races that Sabato terms “Likely Republican,” “Leans Republican,” or “Toss-up” were to go to the GOP candidate, along with the seats he calls “Safe Republican,” the GOP would win 27 of the 36 seats that are in play and gain 10 seats — enough to take control of the Senate.